What does one do when a client or customer demands that each box produced has a unique identifier? The short answer: master the art of individual box tracking with ColumbusFood.

Some manufacturers use boxes in combination with lot numbers to tell when it was produced in the day’s production run. Box tracking is often seen as a requirement in the dairy and meat industries. I can guess your questions; why would I box track? Why does it make a difference?

Box tracking allows the manufacturer to assign individual box IDs and weights. The output of boxes may have the same weight and by using a box ID you see whether it was produced in the beginning, middle or end of the production run.

It'll also allow the user to track a box throughout the process. The user can track a box in the warehouse, if it's on a container, loose or not open at all. All aspects of the process can use box tracking, production, warehouse and sales.

In this article you'll learn how to create a unique box identifier for each box produced using ColumbusFood ERP.

It all starts on the location card. On the Warehouse Fast tab there is a Boolean field for Box Tracked. By checking this field the client is able to use the box tracking functionality. 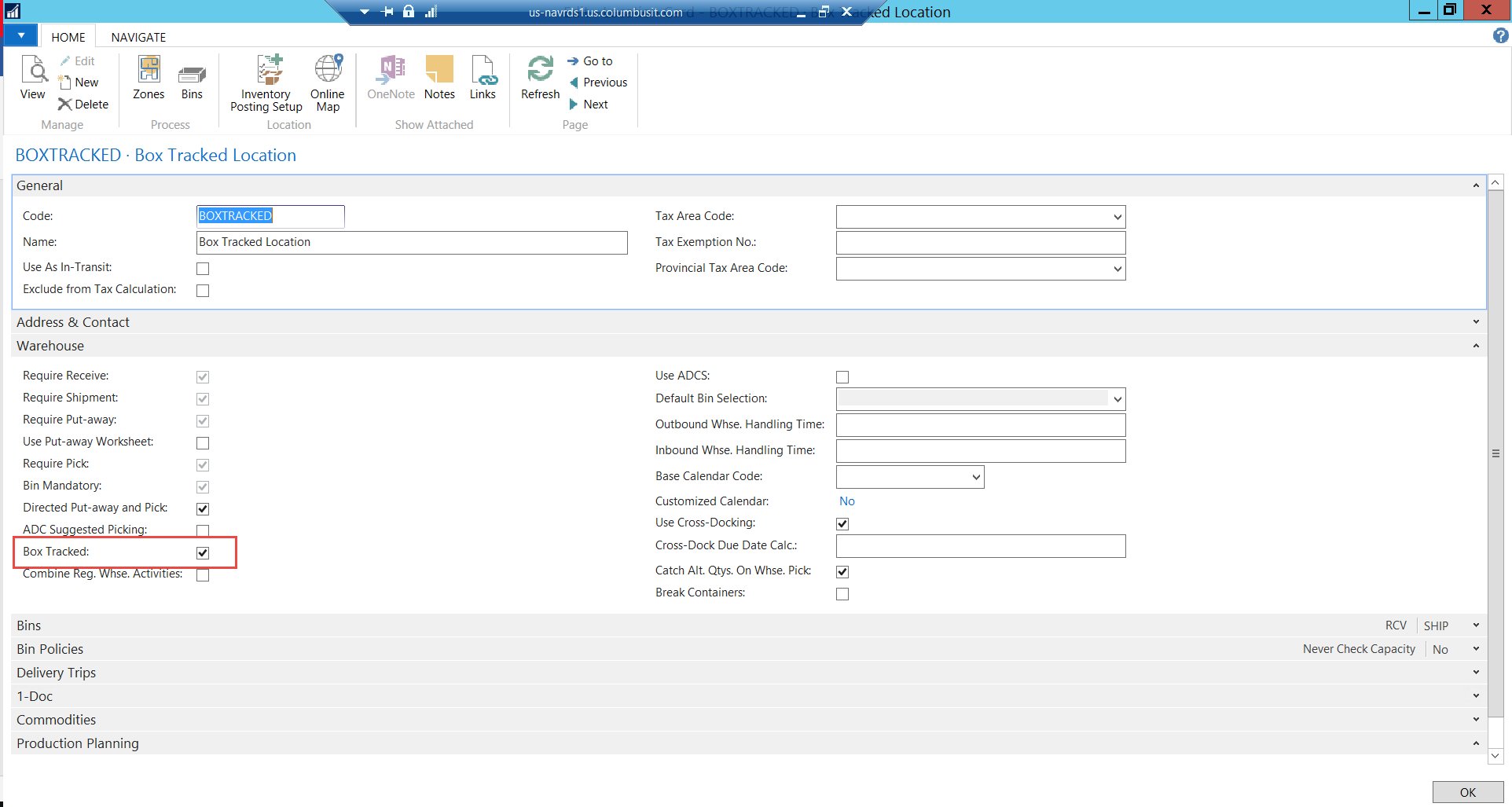 Next is the No. Series. A number series for the boxes will need to be set up and attached to each item that's box tracked. From the No. Series page, set up a new series. 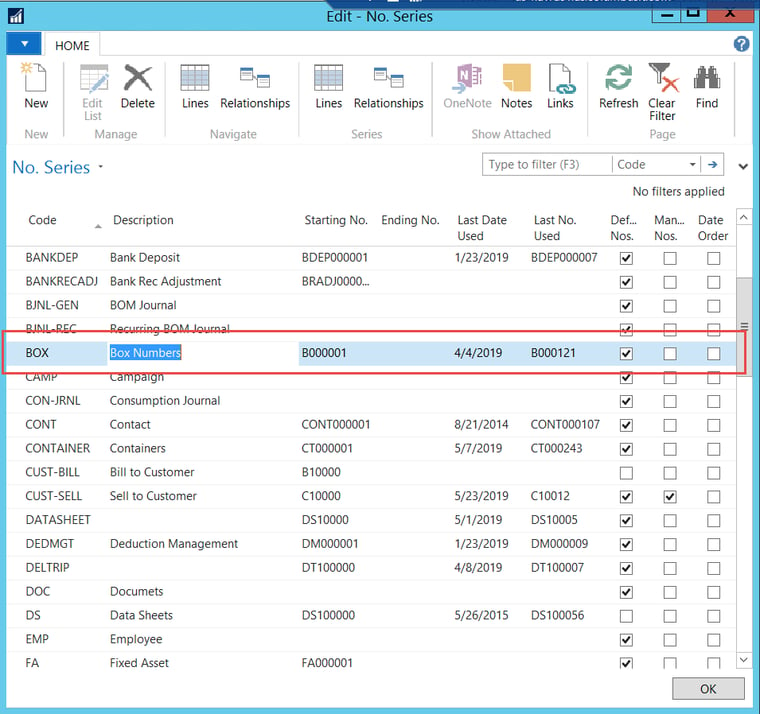 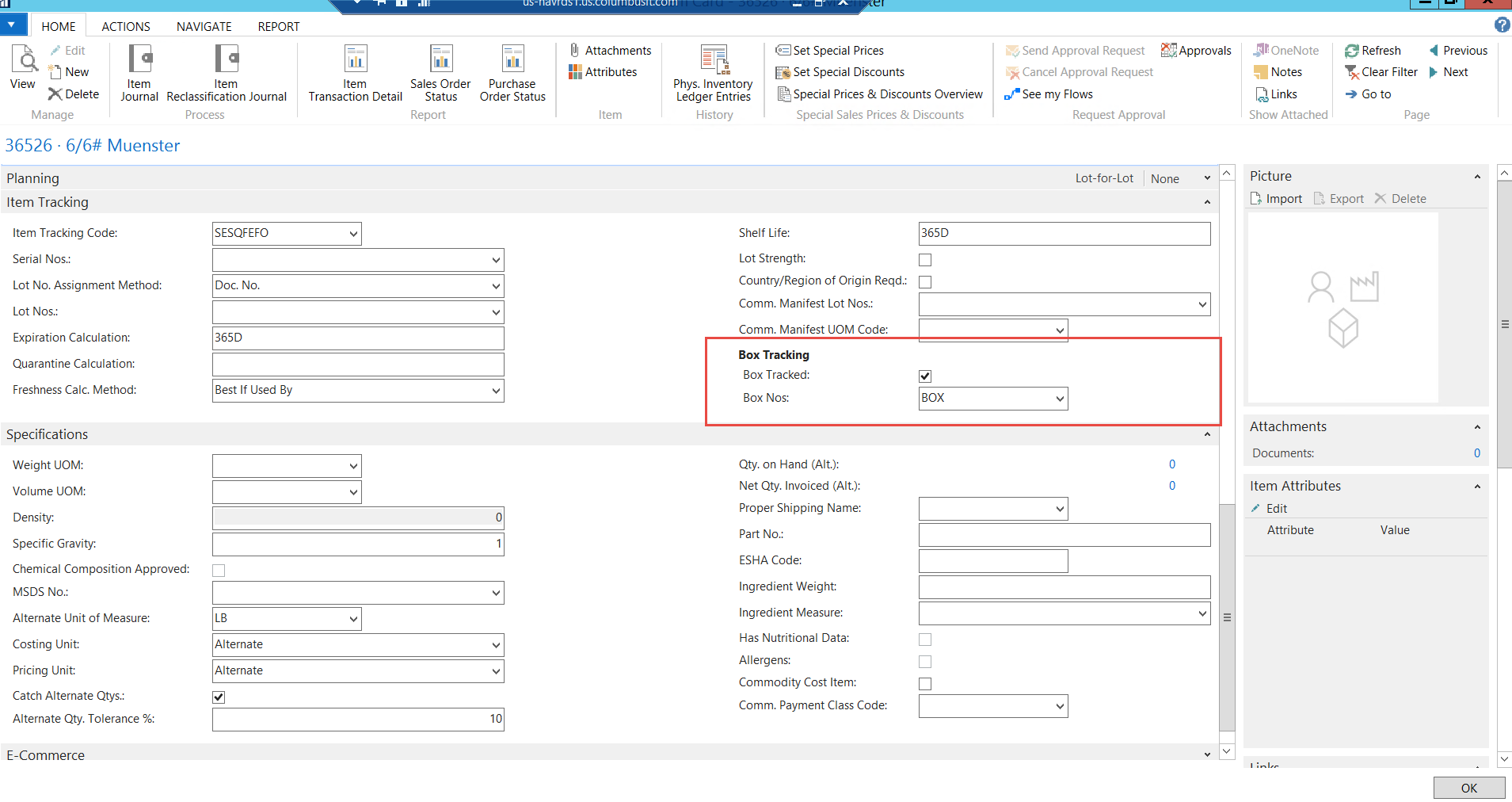 In a simplistic example of how to determine the output of a box tracked item, the user would go to batch reporting. Batch reporting is an interface to the output and consumption journals. In this example we'll only be dealing with output.

The user enters the quantity to output and selects the box tracking lines, which in turn deploy the Box Tracking Lines page. 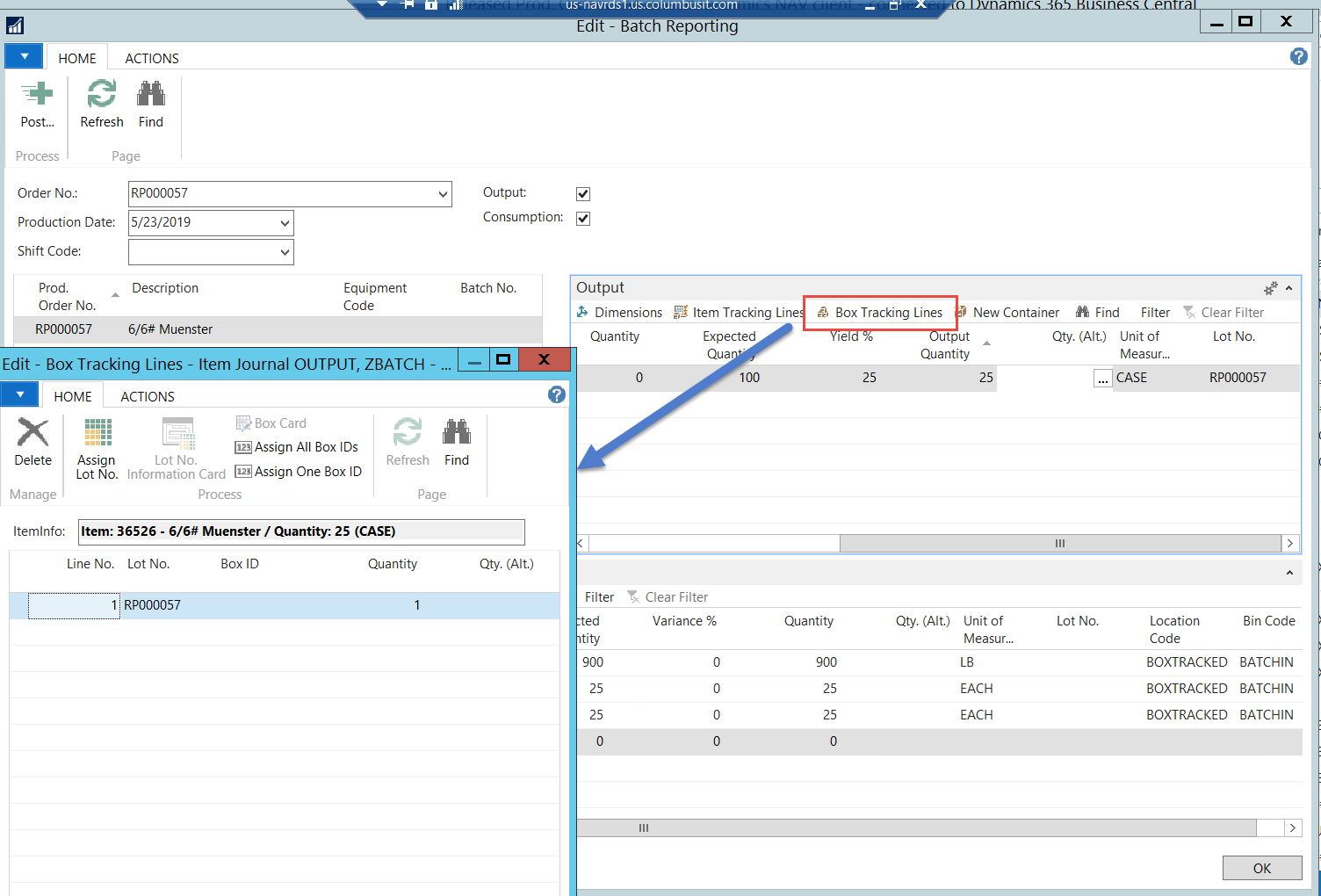 The user can create all box IDs at one time or assign one box ID at a time. 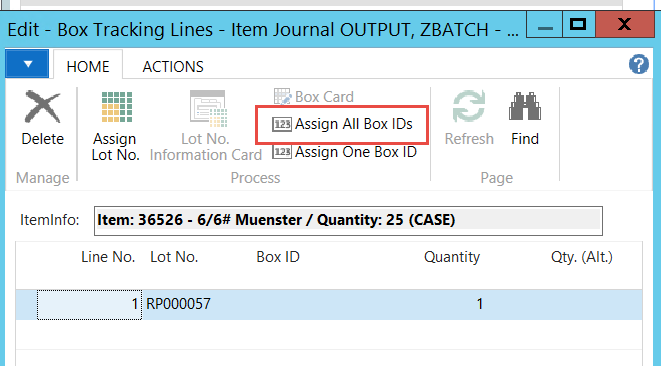 By selecting "assign all box IDs," it has created 25 lines which include the number from the output quantity in batch reporting. The user would now enter the 25 alternate quantities. If the item was a fixed weight item, the standard weight for each box would have populated in the Qty field.

Once the weights have been entered the user would click "ok" and the Qty would be populated on the batch reporting output line. 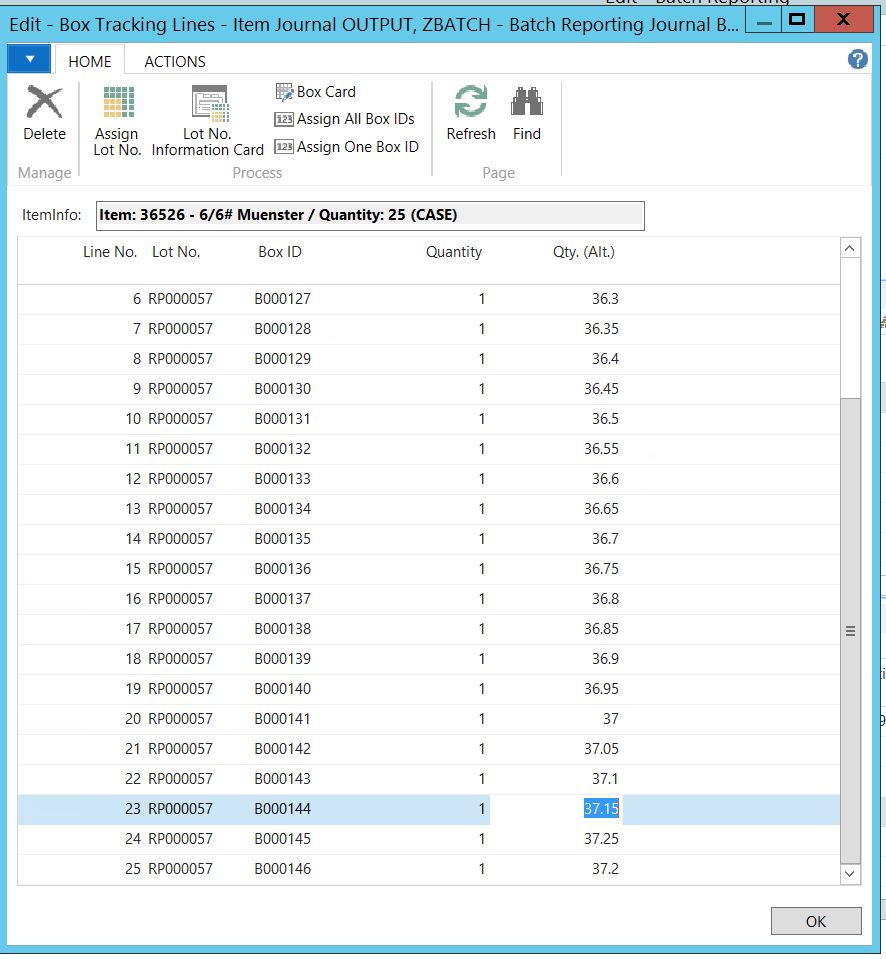 Next the user posts the output. The output was placed on a container during the batch reporting process, so we can now review the container and determine what boxes are on the container.

From the container’s "navigate" tab on the ribbon, the user can click on the boxes and it will show all boxes. 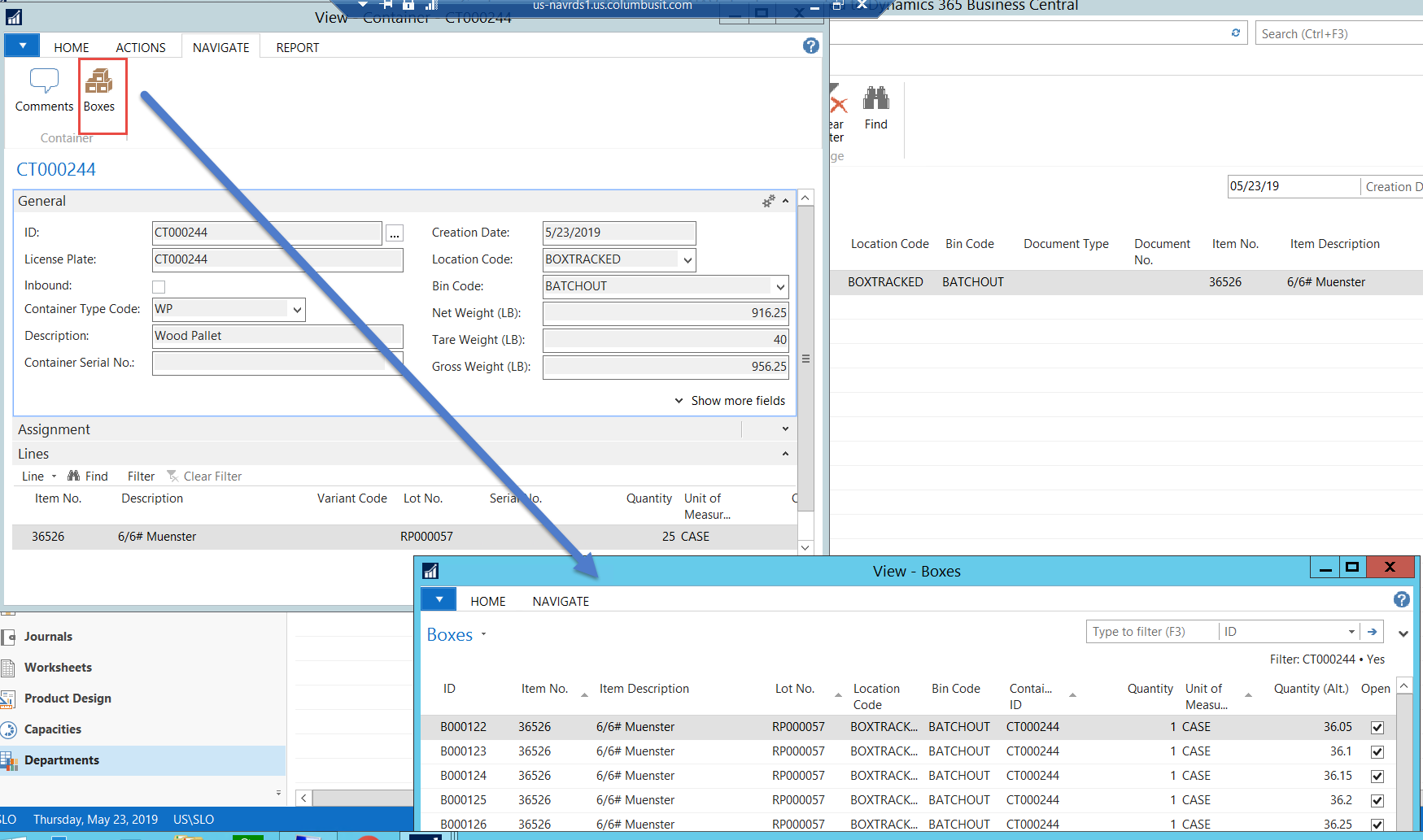 In addition, there is a Boxes page that shows the user ID, item number, lot number, bin code, container number and quantity (alt.). It also shows whether or not the box is open.

Another feature from the box table is the ability to see the box ledger entries which show how the box has been moved throughout the plant. Once the box is shipped to a customer, the box is no longer open and will not be allowed to be transacted against. In the example below, you can see the box was output into the "batchout" bin and moved to bin B01.

Now that you have learned how ColumbusFood's box tracking works effectively, you might also be interested in learning more serialized box tracking.

What does the future have in store for the food and drink industry? In this blog post, we’ll be covering some of the top trends, from the up and coming technology in the food and beverage industry to what today’s consumers expect.
3 minutes

Wouldn't it be great if a single solution could manage all your manufacturing processes—from design, to production management, to logistics?
4 minutes

Modern technologies like the Cloud, Artificial Intelligence (AI), Machine Learning (ML) and the Internet of Things (IoT) are driving exponential growth across industries today. Companies across the spectrum are steadily embracing these innovations to resolve both routine and specific technological challenges, and in the process, modernize their core business operations.
3 minutes

Sustainability is vital for the food and beverage industry because of the deep impact it has on the consumer psyche, which prefers companies that improve the planet and its population's health instead of those which pursue profit.
3 minutes

The Obama administration introduced the Food Safety Modernization Act (FSMA) nine years back. The intent—usher in a systemic shift in the way food safety is handled in the US. Since then, the U.S. Food and Drug Administration (FDA) has taken comprehensive measures to shift the focus in this regard to preventing foodborne illnesses instead of reactively responding to combat them.

Share ”How to master individual box tracking using ColumbusFood” on: