Handling a large implementation with Microsoft Dynamics 365 Finance for a company with an extensive global presence may seem daunting. But fortunately, Dynamics 365 Finance is designed with all the tools and capabilities you need to master the situation — in many cases, right out of the box.

Don't believe us? Let's look at the example of a truly challenging implementation — for a global company with 54 legal entities in 13 countries while using 19 different currencies. The countries in its ledger span the globe, including the US, India, Canada, Australia, Belgium, France, Germany, Luxembourg, Brazil, China, Japan, Singapore, Switzerland and Vietnam.

The company in question was a privately held limited partnership, with a lot of aging legacy systems in place — including Sage 500, Excel, an ISV called ComTrax, Management Reporter, other integrations to ADP, a commodity software called Right Angle, SK Global and of course Excel. And it had four different Charts of Accounts.

Assessing the Challenges for a Global Implementation

What are some of the challenges that come with doing an implementation on this scale? As you might imagine, there's a lot of data migration involved — taking the data from Sage 500 and the other legacy systems, which hold all of the customer, vendor and item information, and moving it successfully into Dynamics 365 Finance.

Fixed assets are another significant consideration, even if you're on Microsoft Dynamics AX 2012 moving to Dynamics 365 Finance. But the hill gets steeper when you have countries all over the world, because each country has its own depreciation schedule for a fixed asset. That means you'll need to implement fixed assets for each country.

Additionally, the business trading relationships for this particular case included not only a standard intercompany relationship — which will consolidate and eliminate in the financials — but also companies that were related parties, meaning that they do get reported in the profit and loss.

The Right Team for a Complex Job

Assembling the right team is one of the prerequisites for success in an undertaking like this. In this case, it took a large village: Columbus supplied a sizeable team of experts to guide the process, and internally the client had about a dozen people dedicated to the project.

An Overview of the Implementation

Let's start with a look at the intercompany settings in Dynamics 365 Finance, which you'll find in organizational Administration > Organizations > Legal entities. When you click new you can decide where the entities belong in the hierarchy and specify settings like language, time zone, addresses and so forth. For each legal entity there will be hundreds of fields where you can add information specific to that entity. 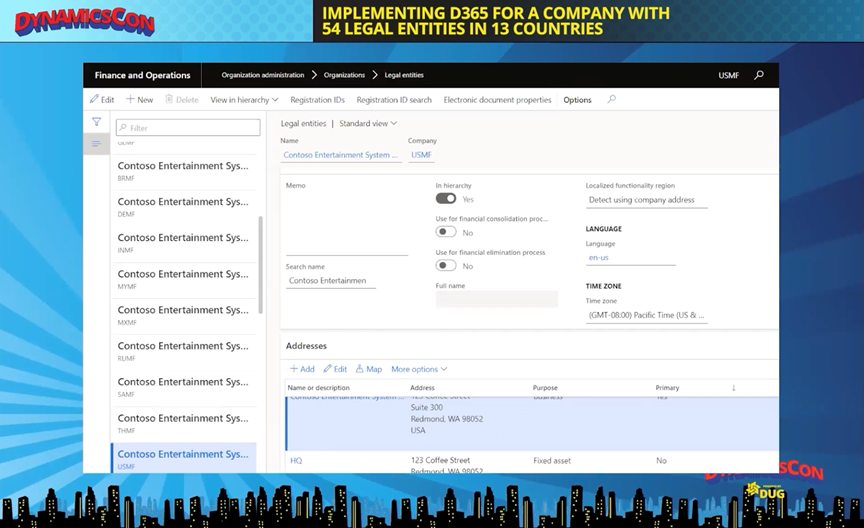 Dynamics 365 Finance wants you to use hierarchies, and this is a way you can tell the system what is going to be eliminated. It offers a very helpful tool for this in the form of its Hierarchy Designer, which allows you to grab legal entities and then place them into a hierarchy structure — making this process easy and convenient. 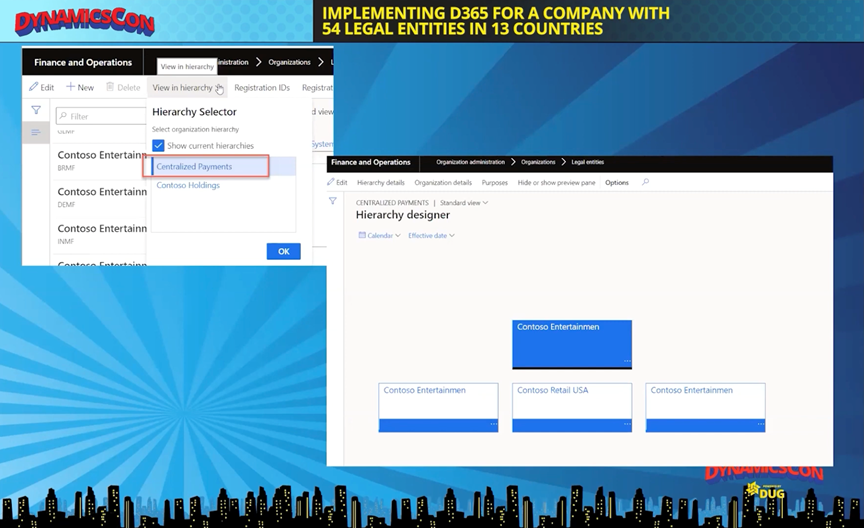 A lot of the tasks for this implementation take place in the General Ledger. Under Posting setup in the General Ledger, you'll find the Intercompany accounting tab. This module allows you to create your organization — your originating company and your destination company, with the debit and credit accounts for each particular entity. So, for each intercompany relationship you want to set up, you can set up those posting profiles. 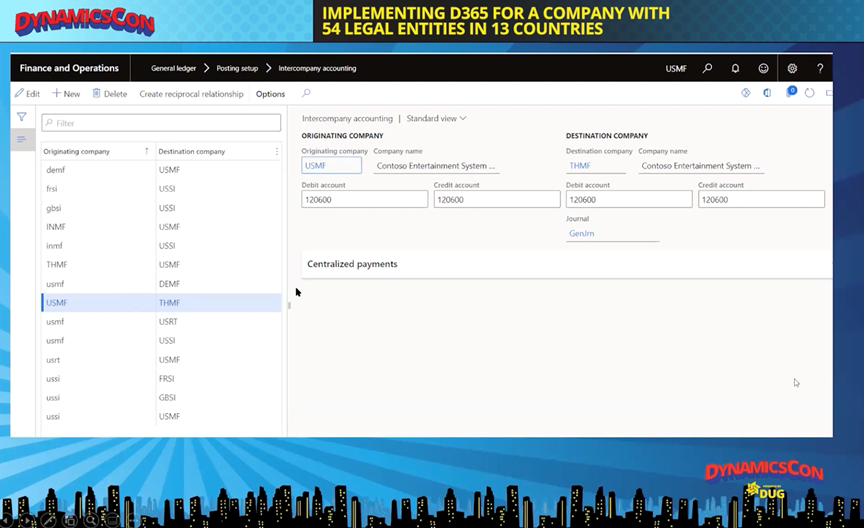 Working with Multiple Charts of Accounts

One of the flexible things about Dynamics 365 Finance is that it allows for multiple Charts of Accounts. When you set up your ledger in your Chart, this is what's going to control all of your postings. We began by choosing the standard Chart of Accounts, and then going to General ledger > Ledger setup > Ledger, where you'll specify that you want the ledger to use your shared Chart of Accounts, and then configure things like your fiscal calendar and what accounting currency and reporting currency you'll use. 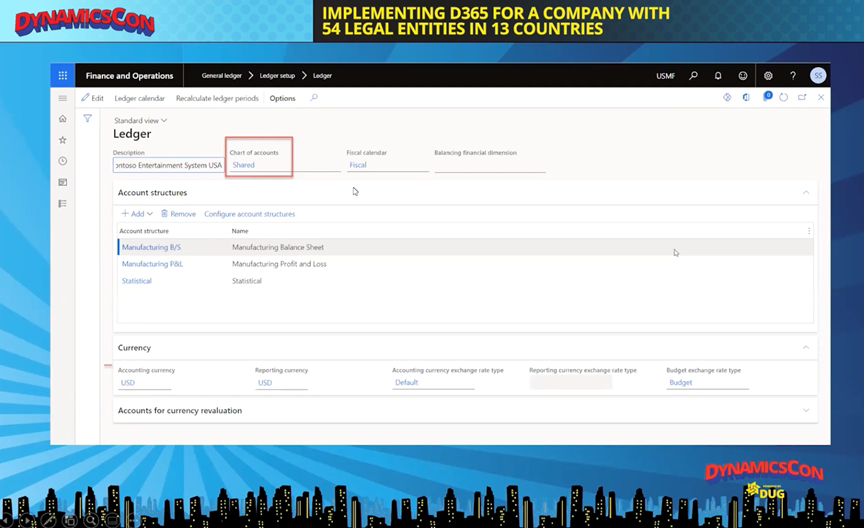 Let's talk about currencies. In the General Ledger, you have the ability to set multiple currencies. You’ll find a lot of functionality in areas that include exchange rates, exchange rate types and foreign currency revaluations.

In the standard grid view for currencies, you can set up the options and rules for a specific currency. 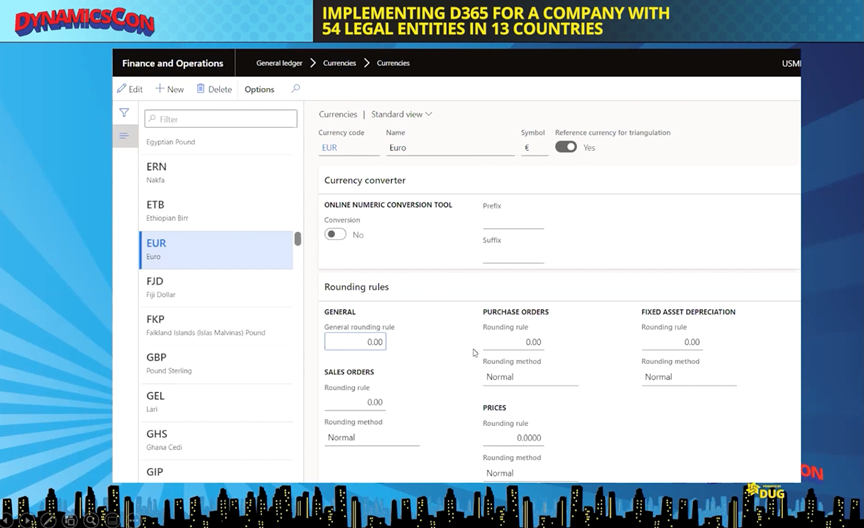 Another powerful tool is the exchange rate type setting. You'll need to know whether you're using the average rate, a budgeted rate, a daily closing rate, constant rate, etc. — because that setting is going to be the trigger for how your currency exchanges work. It’s important that you talk with your finance team, or perhaps your auditors, to make sure that you have that set up properly.

After that, you can set up currency exchange rates — it's important that you choose which exchange rate you want to use, so that when you're ready to convert currencies, you'll have the correct rate in place. 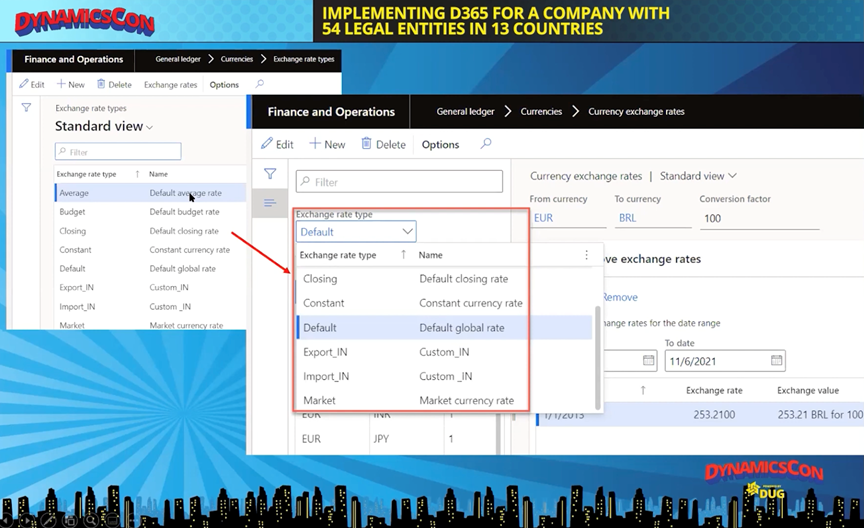 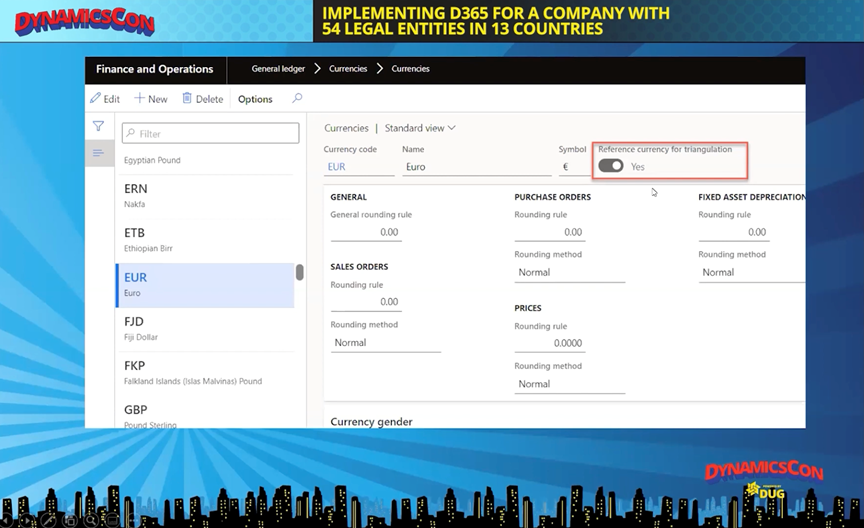 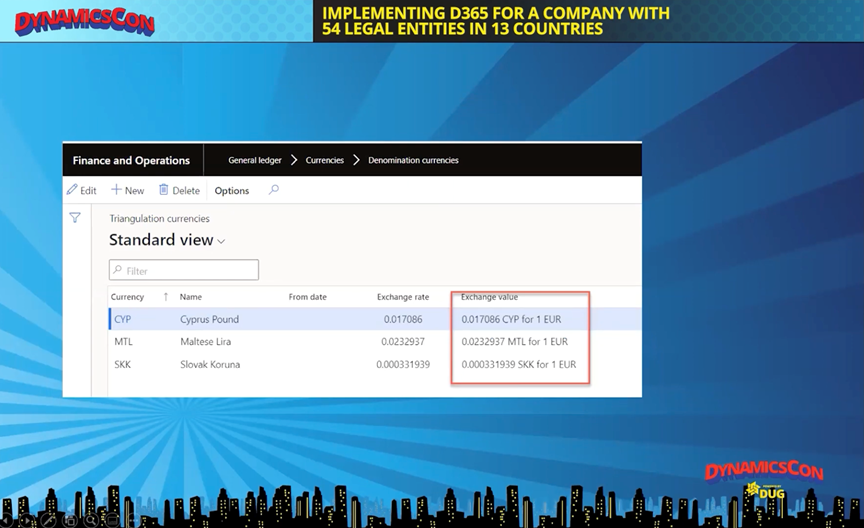 Depending on how often you need to update your currency, you might choose to go with an ISV, which can help you stay on top of currency exchange rates. Or you can simply configure the system to go out and grab a rate. Under currencies you'll find a tab where you can configure exchange rate providers. 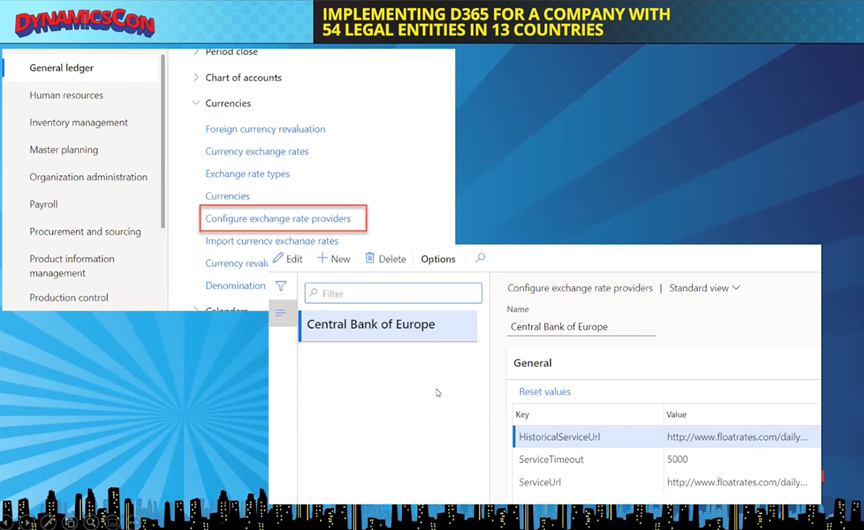 From there you'll be able to import the exchange rates. There's a batch job you can run configure to run in the background and recalculate your rates.

In your Chart of Accounts, you'll have accounts that have to deal with your currency adjustments for profit and loss, and for real and unrealized gains. 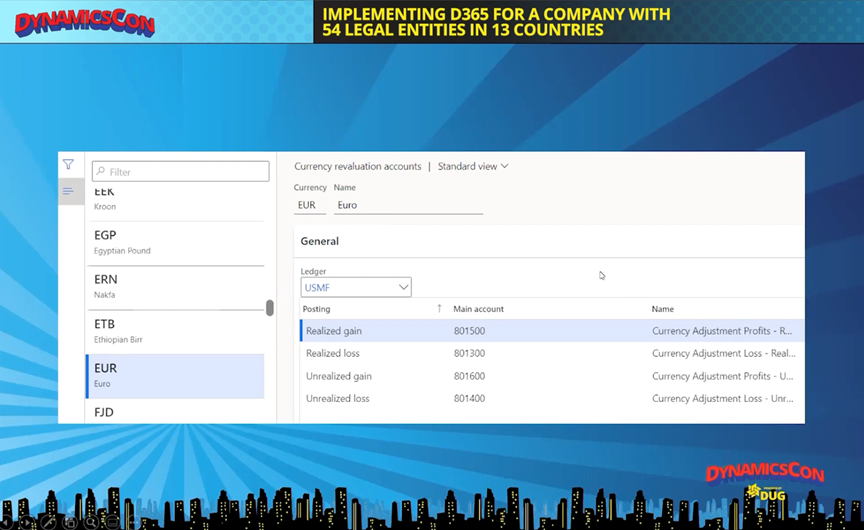 Ultimately, these start tying together. The way you set up the Chart of Accounts, your currencies and your posting profiles will be visible in your trial balances. This shows all of our charts and what they hit. 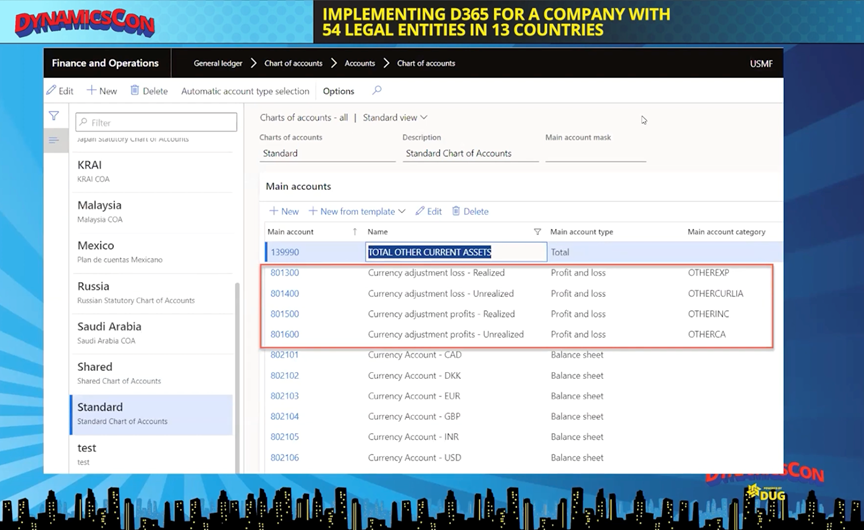 Another useful functionality that Dynamics 365 Finance offers is security. For this project, one of the company's challenges was that they had around 70-100 employees all around the globe. Some of them were responsible for a few specific countries. Others needed to see all of them, or maybe just one in particular. Let's say you have someone who works in Japan who needs to see the trial balance for Japan, but you want to make sure they don't see the trial balances for other countries. How do you accomplish that?

Fortunately, Dynamics 365 Finance has very good functionality based on users, right out of the box. We'll start by going to System Administration > Users. 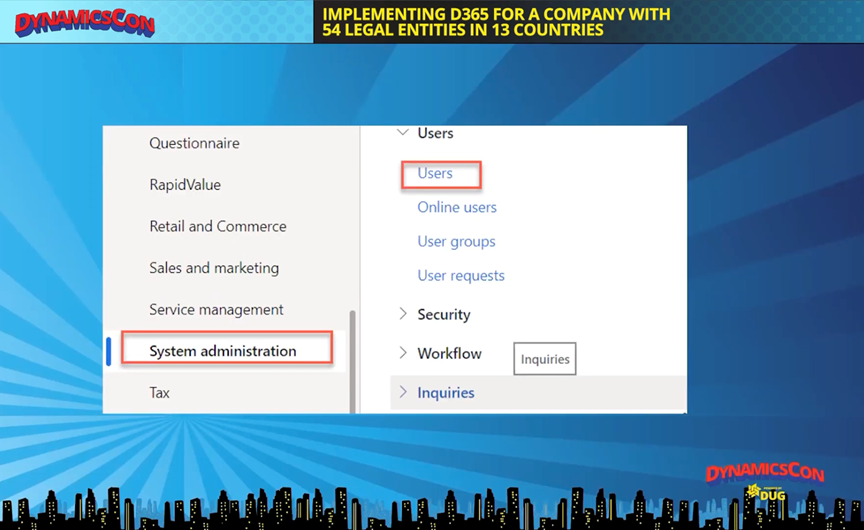 From there you can pull up a particular user from the grid, and on that screen you can assign specific roles for that user. 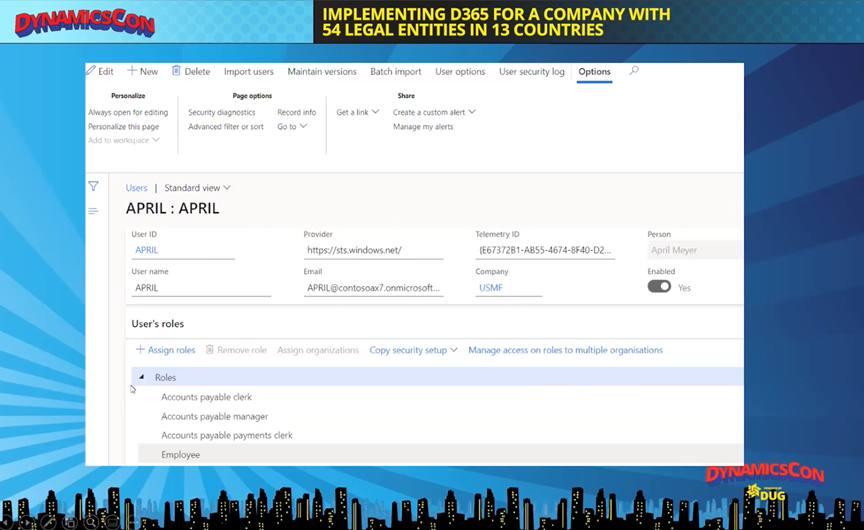 It's important to note that in addition to specific roles, System Users have permissions as well, which is why System User is highlighted in the screenshot below. 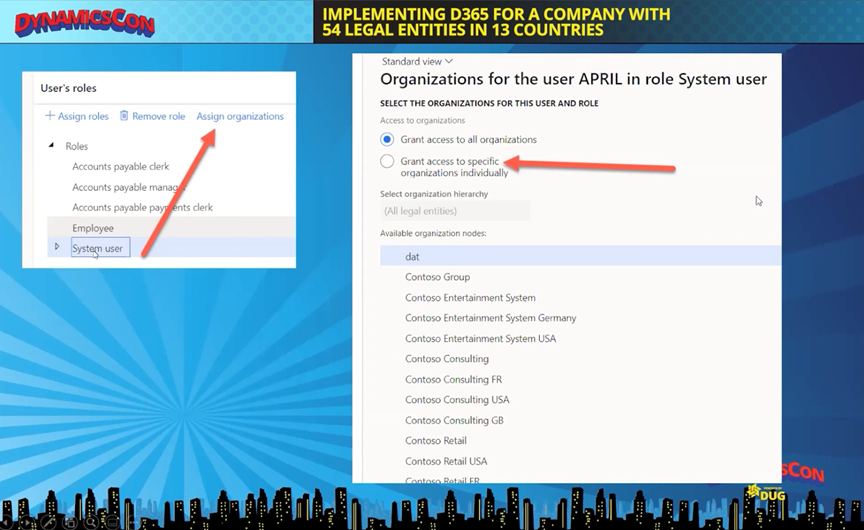 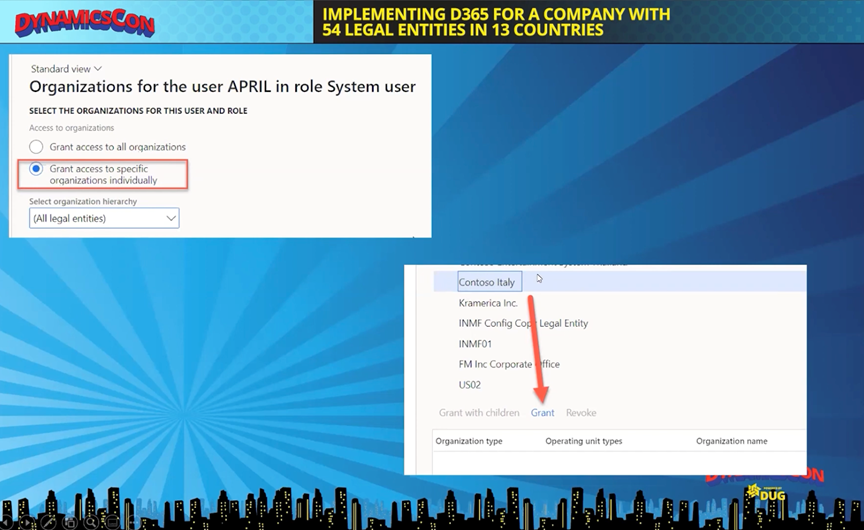 When you grant permission, you'll see that the legal entity you chose appears in the grid. You'll need to repeat this process for each individual role. If you grant someone permission to an organization by mistake, you can click Revoke, which will remove it from the list. 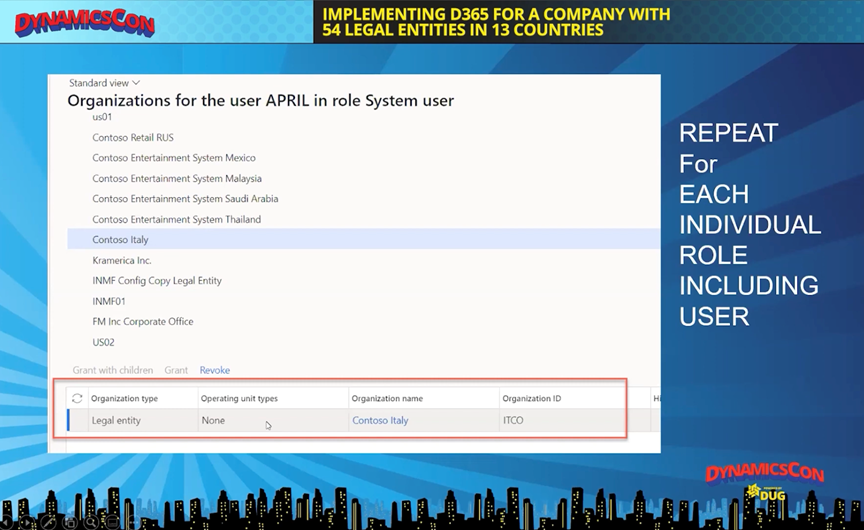 While it does involve a lot of mouse clicks, what's great about this is that it gives you precise control over each user in terms of what legal entities they can view, what legal entities they can work in, and then what rules they have for a specific legal entity. And when it came to an implementation of this size, we found ourselves relying heavily on this convenient out-of-the-box capability to make sure that all the roles were configured correctly.

Ultimately, for a project with this many countries, this many currencies and this many legal entities, having precise management of legal entity setup, currency setup and security setup helped ensure a smooth implementation, allowing the company to get the functionality that it needed for a successful post go-live operating structure.

Watch the Webinar for a Closer Look

Interested in learning more? Watch a presentation from DynamicsCon with Sean Sennott, Lead Solution Architect and US D365 Head of Architects for Columbus Global, where he explores this topic in greater detail with a live demonstration in D365.

Webinar: D365 for a Company with 54 Legal Entities in 20 Countries - Finance and Operations

As part of its biannual release cycle, Microsoft just published the 2022 release wave 1 plans for Microsoft Dynamics 365. This wave features new capabilities and enhancements that will launch between April 2022 and September 2022.

So you just upgraded to the latest release of D365 F&O / SCM and you noticed that some things may not be working exactly as they were before? Indeed, Microsoft has changed the update process for Dynamics 365 Finance and Supply Chain Management. Some updates will now default to turn on features automatically, and other feature updates will be mandatory.

When supply and demand don’t align, manufacturers can be left with too much product or not enough raw materials to meet demand. A McKinsey report found that 73% of respondents had issues with their supplier base, and 75% had problems with production and distribution due to the pandemic.

Microsoft Cloud for Manufacturing is available for public preview.

Share ”How Columbus Approached a Multi-Country, Multi-Currency Dynamics 365 Implementation” on: